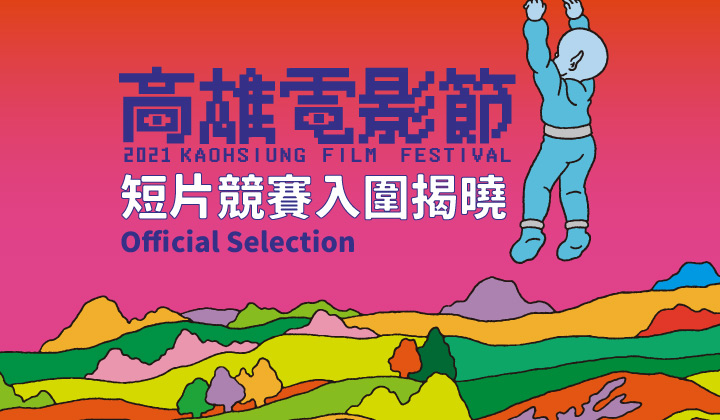 The 2021 Kaohsiung Film Festival announced its finalists for the International Short Film Competition today (Aug. 31st). This year, a total of 2,422 entries from 91 countries were submitted. After many days of intense discussion among the jury  81 films were selected for the “International,” “Taiwan” and “VR” sections to compete for 14 awards with a total prize pool of over NT$1.2 million. The winners of the “International Short Film Competition” will be announced on Oct. 24th.

KFF has been cultivating short film competitions and short film sections for years and is the third-largest short film competition in Asia after Tokyo International Short Film Festival and Busan International Short Film Festival. According to the preliminary jury, this year, due to the pandemic, the number of entries for feature films and documentaries was lower than in previous years, but the jury were amazed by the quality and quantity of animated shorts, which are more diverse and richer because they are not restricted by traditional filmmaking methods. The jury were also impressed by the creativity of the shorts that focus on the global concern for human rights and environmental issues.

As for the works of the students in Taiwan, they are also well recognized by the preliminary jury due to their excellent choices in terms of genre, topics, and creative perspectives. Oasis chronicles the journey of an overseas Chinese student from Malaysia Chin-sheng Chen, a victim of the White Terror, who came to Taiwan to study, but was framed by the Investigation Bureau and suffered 12 years of injustice. Today, he is a docent at the National Human Rights Museum, and through telling his story again and again, he embarks on a journey of forgiveness and letting go. My Grandma is an Egg uses an egg as a metaphor for the problem of child marriage in early Taiwan, revealing the situation of women in the old society. In the animation section, the world premiere film Bruise and Girl in the Water were also well received. Girl in the Water is a clever portrayal of a woman’s self-healing process after the loss of love by using a fallen wall mold, and its delicate style has already been recognized by three major international animation film festivals: Annecy International Animated Film Festival, Animafest Zagreb and Stuttgart International Festival of Animated Film.

The Taiwan section’s narrative shorts are also spectacular this year in terms of creativity. The Golden Bell Award winner for Best Actor Mu-Yi Chen plays the role of a corpse who
turns his funeral scene into his farewell ceremony by accident in Life of Lai. World premieres Tank Fairy and THE Boy Q are unique among the Taiwanese competition short films with their magical and realistic style. The joyful tank fairy and the fierce and powerful political metaphors bring an abundance of human qualities into fairyland. My Sister, produced by Yu-Chieh Cheng and directed by Ke-Yin Pan, is a heart-warming family drama that depicts family bonding. Also a world premiere, Last Meal is the latest film by documentary filmmaker Arrow Peng, whose film portrays the issues of old age and homeless people in a narrative style. The lineup for the International Short Film section is also remarkably strong, with many award-winning and shortlisted films in the world’s top three film festivals, including I Am Afraid to Forget Your Face, the first Egyptian short film to win the Palme d’Or at Cannes Film Festival in 2020. A Love Song in Spanish and Motorcyclist’s Happiness Won’t Fit Into His Suit were both shortlisted for the 2021 Berlin International Film Festival. The Game, which was in the short film competition at the 2020 Venice International Film Festival. Grand Prize winner at the Brussels International Fantastic Film Festival, You’re Dead Helen is a darkly humorous account of a man-ghost relationship that cannot be easily shaken off. The Departure, Friend, and Ateh, which depict the bittersweet feelings of teenagers facing separation and coming of age, were also unanimously praised by the preliminary jury.

Besides the International and Taiwan sections, based on the submission data since 2018, it appears that the pandemic has not hindered VR creation, but rather stimulated the expansion of immersive-creation. The widespread use of “ VR Live Performance ” has also given rise to the formation of the Metaverse, a virtual reality social technology that allows audiences and actors to meet in the world of VR and interact with each other in real-time, creating multiple possibilities of cross-temporal and cross-boundaries performances. The jury were astounded by the sophistication of this year’s submissions and the maturity of their creative approach. After days of heated debate, it was decided to increase the number of finalists to allow outstanding works to compete for the awards and open the eyes of the audience and creators.

In the VR section, 21 VR works were nominated , including two selected works from Taiwan: In the Mist by new media artist Tung-Yen Chou, which had a sell-out premiere at the 2020 KFF and was selected for a “Special Project in the Official Selection-Out of Competition” at the 2021 Venice International Film Festival; and LIMBOTOPIA in VR, a graduation project by Wen-Yee Hsieh and Co-Creator Chun-Lien Cheng at Feng Chia University and a KFF world premiere among other exceptional international films, which depicts a realm of souls being reborn after death. In addition, Replacement was awarded the VR Crystal Award at the Annecy International Animated Film Festival, and Goliath: Playing with Reality along with Baba Yaga were two films not only recognized by the Venice International Film Festival but also brought together Tilda Swinton, Star Wars’ Daisy Ridley, Kate Winslet, Glenn Close and other top actors to do voice acting. The Severance Theory: Welcome to Respite adopts multiplayer online experience as well as real-time cross-boundaries performance technology to transform the physical theater into an “online immersive interactive theater,” allowing the audience to enter the inner world of people with dissociative identity disorder .