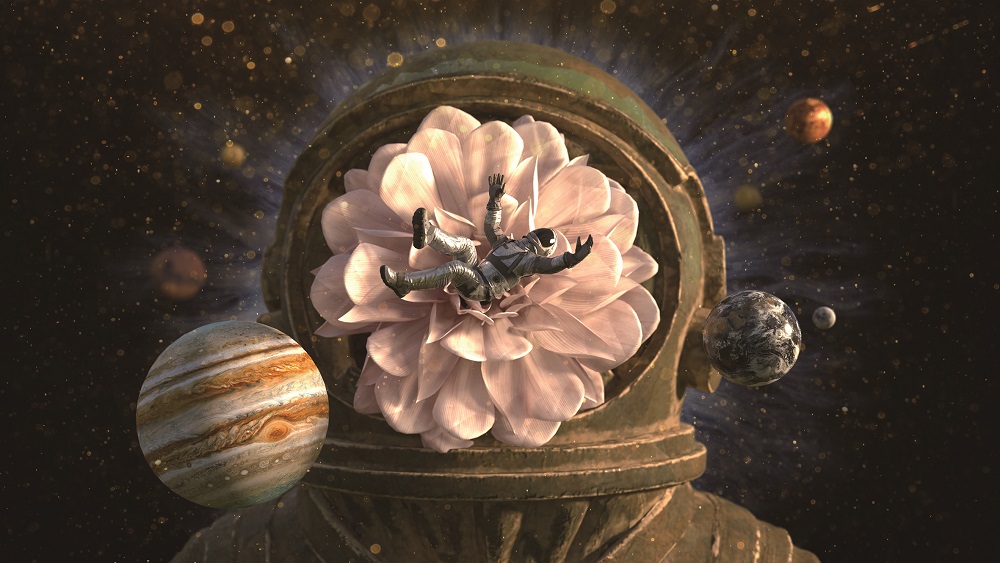 The Kaohsiung Film Festival today (15 September) announced the world premiere program of "Kaohsiung VR FILM LAB Originals" supported by the "Kaohsiung VR FILM LAB" program. Fish WANG, who won the Golden Horse Best Animation Short Film Award, makes his VR debut with "Red Tail Ep.1”to create a dream-like fantasy world in the form of stop motion animation. HUANG Dan-Chi and French director Morgan OMMER co-write and co-direct "Madame Pirate: Becoming A Legend". This work recreates the legendary story of CHING I Sao , the notorious 19th-century female pirate in Asia. The team of "FabLab Dynamic" starts from the late legendary dancer XIAO He-Wen and tries to recreate the stunning dance in the virtual world through AI computing and motion capture photography technology in "Project ZERO｜Episode One”. New media artist HUANG Hsin-Chien, who took the Venice Film Festival, the Cannes Film Festival-associated Marché du Film and the South by Southwest Film Festival by storm, presents his latest VR work "Samsara" for its Asian premiere. The 2021 Kaohsiung Film Festival launches the "XR Dreamland" (the section of immersive images) with a VR Headset Rental Package. The audience will not have to visit Kaohsiung. Instead, they can log in at home with one click and experience the charm of virtual reality images.

This year, "Kaohsiung VR FILM LAB Originals" will showcase 6 VR works. As the most anticipated section among international filmmakers and industry professionals in KFF's XR Dreamland. Through this channel, it demonstrates creativity, culture, and technological maturity in these Taiwan original productions. It’s also a key occasion for international players to see what Taiwan has to offer. In addition to the four latest original VR titles, the international award-winning "KUSUNDA - Speak to Awaken Ep.2" will also be showcased; and "LIPs" by LIN Pei-Ying, the project won the Grand Prize at Kaohsiung VR FILM LAB Talent Workshop in 2020, will also be shown as a prototype during the festival, allowing audiences to see the different stages of VR creation.

Starting from 2017, "Kaohsiung VR FILM LAB" is a support program sponsored by the Industrial Development Bureau and Kaohsiung City. For the past five years, more than 25 original VR works have been brought to the world. Every year, a VR workshop is also held to help creators to invest themselves in the creation immersive images. Many of these creators shone in international film festivals. "KUSUNDA - Speak to Awaken Ep.2" won the Storyscapes Award at the Tribeca Film Festival; Director CHOU Tung-Yen "In the Mist" was selected for the Special Event - Out of Competition at the 2021 Venice Film Festival. Director HUANG Hsin-Chien's "Samsara" nominated to the competition of the Venice Film Festival.

The 2021 Kaohsiung Film Festival is to take place from 15 October to 31 October. Tickets will be available in person or online from 12:00 (GMT+8) on October 2. To cater to movie fans all over Taiwan, in addition to the physical screening of some of the films, the KFF will also collaborate with shift72, an international online platform, and INVR SPACE, an experienced XR platform development team who has collaborated with multiple international film festivals to create online festival platforms, to customize an online XR platform “XR Dreamland Virtual.” Fans can enjoy the selection of this year's KFF not only at the cinema but also at home simultaneously through the online platforms. More information about the program and the events will be announced soon. Please follow the KFF official website , Instagram and Facebook for the most updated information.

Throwing the audience into the cycle of life, HUANG Hsin-Chien detaches himself from the physical body through VR
New media artist HUANG Hsin-Chien has made his name known for his VR creations. In 2017, he won the first Best VR Experience Award at the 74th Venice Film Festival with "La Camera Insabbiata," and Ep. 1 of "Samsara," his new work in 2021, has collected various international awards, including the Jury Awards of SXSW Virtual Cinema Competition at South by Southwest Festival (SXSW) and the Best VR Story Award at the Cannes Film Festival - Marché du Film. The full version of "Samsara" has been selected for the VR competition at the 78th Venice Film Festival, and will also have its Asian premiere at the Kaohsiung Film Festival! Through the interactive and 4DViews Volumetric Capture photography technology, this experience allows the audience to "reincarnate" in different bodies and reflect on the creation and destruction of human beings in the cycle of life in every life.

Fish WANG creates a 1-to-1 scale stop motion puppet animation, a fantasy journey in a surreal world
The Golden Horse Best Animation Short Film Award winner Fish WANG pushes the envelope and explores VR animation for the first time. He collaborates with the famous local VR technology team "Funique VR " to create "Red Tail Ep.1." The work is made of delicate scenes and character models. With high-resolution photogrammetry, a stop motion puppet animation is made possible, creating a world of multiple dreams. One surreal scene that is full of eyeballs is inspired by the old photographs of Taiwan's early signboards of eye clinics. It also pays tribute to the classic images in "Screw Style" by Japanese alternative comic master Tsuge Yoshiharu, which adds a magical touch to the work. The audience will follow the protagonist on a poetic and fantastical journey to find the secret of the Red Tail. 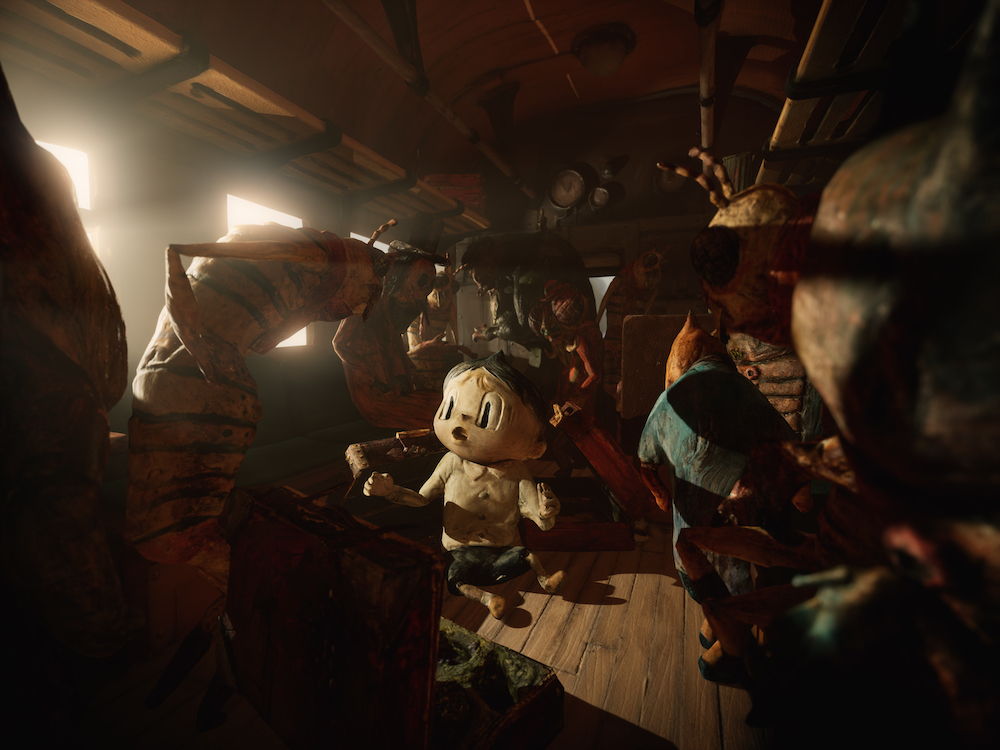 The woman who terrified the Western merchants! HUANG Dan-Chi re-creates Ching I Sao, the notorious female pirate in the 19th century
HUANG Dan-Chi, French director Morgan OMMER and Serendipity Films work together to create a title which combines animation and live action. It stars YAO Yi-ti and HUANG Shang-Ho and recreates the story of the legendary figure of the seas, CHING I Sao, who was a notorious 19th-century female pirate. YAO Yi-ti plays the role of a female pirate who gradually rose to the top from a prostitute with her wisdom and courage and took command of a pirate fleet. As one of the most powerful and notorious female pirate leader in history, CHING I Sao was not only regarded as a sting in the eye of the Qing Dynasty, but also made the emperor bow down and ask for help. She defeated the invading British army with LIN Zexu. Her deeds are also commonly found in Western literature, not only terrifying the Western merchants, but also appearing in Hollywood movie "Pirates of the Caribbean 3" as a female pirate character. However, she was totally forgotten in the Eastern history.. 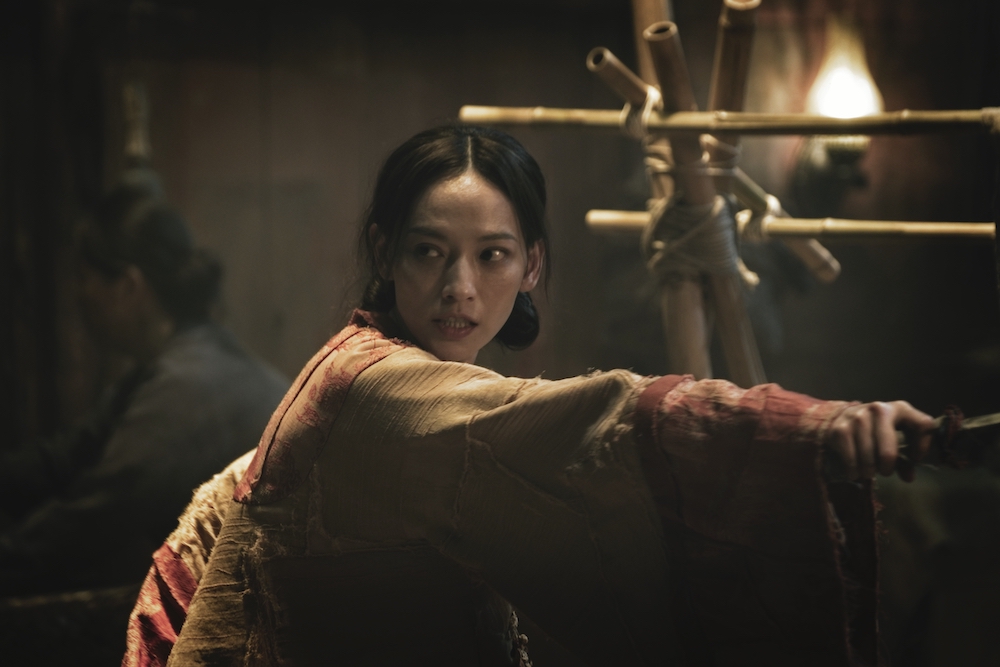 A creation across time and space! Artificial intelligence dances stunningly in the virtual world.
The team of "FabLab Dynamic," which has been working on digital art creation quite some time, specializes in works which incorporate interactive design, motion-sensing technology, and ultra-high resolution 3D scanning technology. Their new work "Project ZERO｜Episode One" starts from the late legendary dancer XIAO He-Wen and tries to recreate her dance performance in the virtual world through AI computing and motion capture photography technology. It looks into the possibility of continuing one's mind in the virtual world after the body perishes. The audience is also invited to piece together the dancer's life history and creative trajectory from the digital footprints. 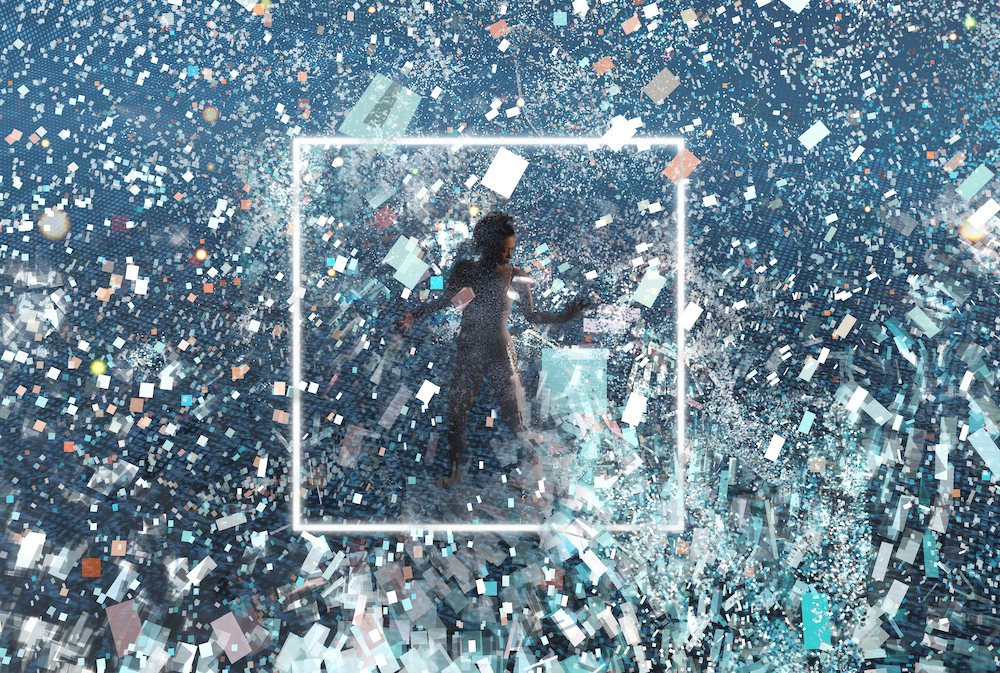 Taiwanese-German co-production focuses on endangered languages, won the Storyscapes Award at the Tribeca Film Festival
"Diving into Siraya - Speak to Awaken Ep. 1," the first episode of the Taiwanese-German "Speak to Awaken" VR series, was directed by director LAI Kuan-Yuan. It premiered at the Kaohsiung Film Festival last year, and this year, directors Gayatri PARAMESWARAN and Felix GAEDTKE from the German team Nowhere Media and co-producer LAI Kuan-Yuan completed the production of "KUSUNDA - Speak to Awaken Ep.2." The voice-driven interactive experience also uses the AI speech recognition system, with motion capture and camera measurement techniques, to draw the public's attention to the cultural topics of ethnic minorities. It has won the Storyscapes Award at the Tribeca Film Festival 2021 and was selected in Special Event (Out of Competition – Best of VR) at the 78th Venice Film Festival. 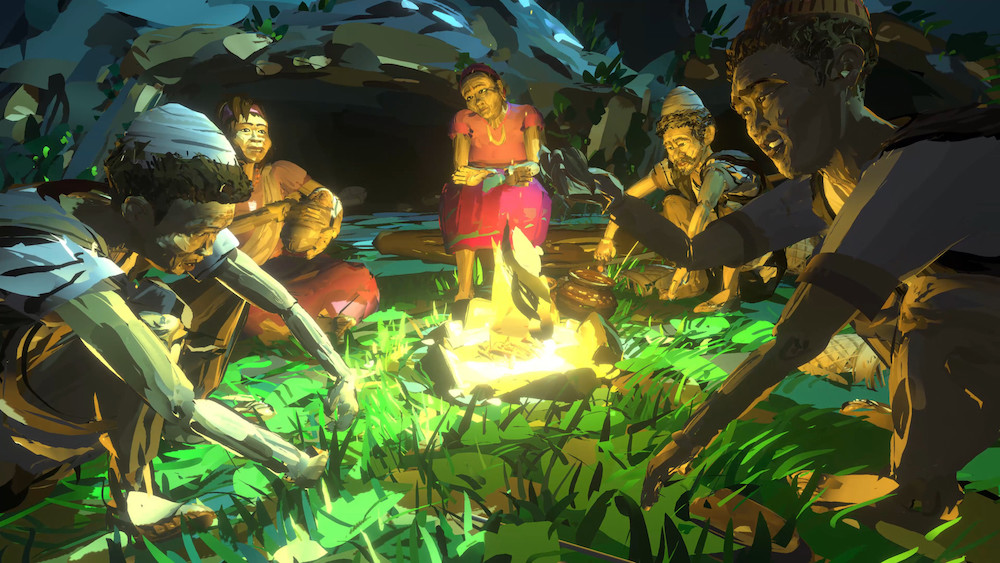 Exploring the garden of eroticism - an interactive VR experience for the female senses!
Director LIN Pei-Ying won the Grand Prize at Kaohsiung VR FILM LAB Talent Workshop in 2020. Through the visual and audio art of virtual reality, the work presents the sensual experience of female eroticism as a sexual landscape, such as canyons and gardens. Through the interactive stimulation of visual guidance and auditory ASMR, an interactive experience leading to self-awakening will be opened up. This work will be shown for free as a prototype during the festival, allowing the audience to see the different stages of VR creation. 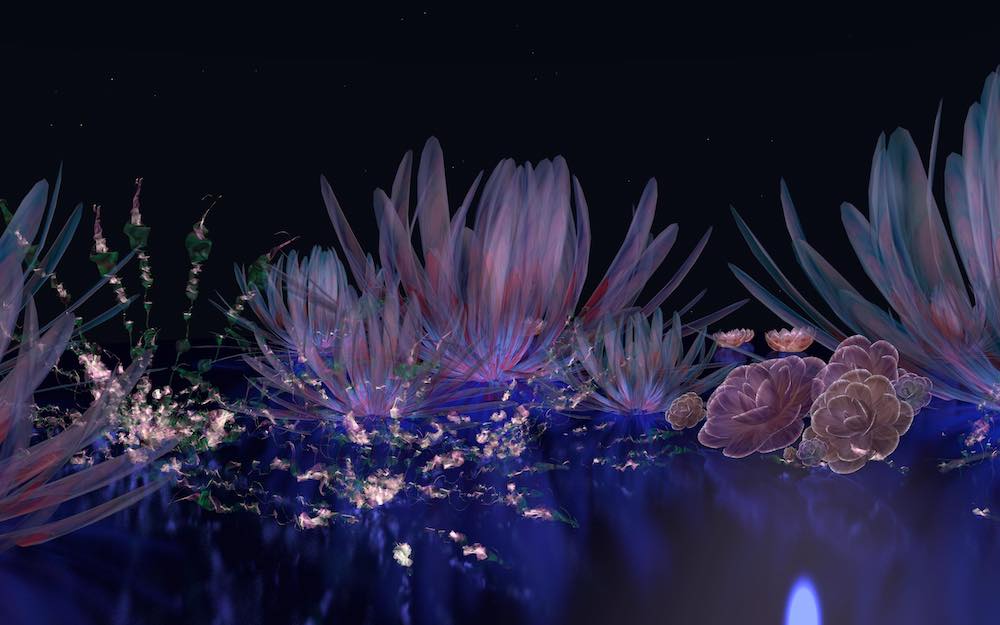